How to Deal with A
Bullying Boss

You have to tread carefully with a bullying boss if you need to keep your job until you find another.

Have I already mentioned you will need to find another job? If the resident bully is the boss you are already on the back foot. The boss has legitimate power over you and your role and can therefore directly influence your success or failure. Not good if you have a bullying boss and you intend to stand up for yourself.

I used to work as a trainer on a programme geared at bringing about change in managers who were either too aggressive or not assertive enough. These kinds of changes take time, effort and commitment. They involve changing beliefs as well as behaviour.

Unless your manager is on a program aimed at bringing about change in this particular behaviour, chances are slim that they will spontaneously improve.

Even though their staff casualties are high, a bullying boss often gets the results they want by means of their intimidating approach. This means they have little incentive to change. Pain can encourage change, but unless your boss is experiencing a whole lot of discomfort as a result of his/her bullying, don't get your hopes up. If the company likes the results a bullying boss gets, they might not be too interested in seeing them change either. And they might not like to hear your complaints. 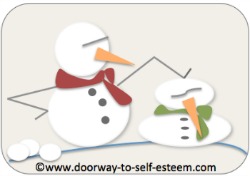 I've been in situations where bullying bosses are tolerated by management because of the financial success they achieve. Don't waste your time. Make an assessment of the situation, but plan to move on.

Can't leave straight away? Have a huge mortgage and two kids in school?

If you work for a governmental organization or large firm with clear grievance procedures, follow these.

If you work for a small organization you are likely to find that these policies, even when in place, are not adhered to with equal commitment. The tips below might help.

Decide On Your Limits and Stick to Them

If the bullying is about getting you to work extra hours without pay - decide what is fair in the situation and the next time you are asked, stick to your decision.

I have found it is always useful to be reasonable and 'give' as well as take. Managers, even bullying bosses, are more willing to accept a polite refusal together with a reasonable explanation, if they know you usually pitch in when required.

Assertiveness and courage are required here. And it helps to start as you mean to carry on i.e. it is much harder to establish a boundary once it has been overstepped a few times, than it is to establish it from the start.

Bullying bosses thrive on squashing opposition. Unless you are prepared to do everything they say, whenever they say it, sooner or later you will face conflict. The nature of the conflict might range from their refusing a legitimate request (e.g. a day off) or take the form of an unreasonable demand (e.g. work the whole weekend) which any normal person will object to. Or it might be something a lot less polite - like rude criticism or shouting and yelling abuse.

If you want to preserve your self esteem you will have to be ready to confront the issue. You might have 'quiet periods' when you can convince yourself that everything is fine - use this time to look for another job. Very soon you are likely to be back in the 'hot seat' facing awful, inappropriate behaviour. Again, your ability to assert yourself is key.

How To Confront The Issue

Carefully. I've found non-verbal pre-empting or 'blocking' the offensive behaviour is more effective than verbal confrontation after the fact. This is extremely tricky and totally depends on the situation and what you are capable of as well as on what the bullying boss is capable of.

If you can somehow sidestep the inappropriate behaviour by being friendly, assertive and direct in your approach, turning away at just the right moment (judge this one carefully, as it might backfire!), displacing the attention on the task at hand, or asking a relevant question - you might take the wind out of the bully's sails. See if you can find someone at work who copes well with this particular manager. Watch what they do and learn from it.

Often a well-placed word at just the right time can swing a situation. Best of all, if you can get the person to laugh, this is more effective than the route of 'having a talk' after being shouted at. Having a talk only works if the other person is reasonable. However, it takes very sophisticated diplomatic skills to avert bullying behaviour and very few people are blessed with this level of interpersonal skill.

Most of the time managers who behave in this way are completely unreasonable when in the swing of things. Pointing their bad behaviour out to them, even tactfully, hardly makes them act in a better way. If anything they feel more threatened and try to blame you for their actions. This becomes very tricky if they start finding fault with your work, as you are then placed in the position of having to defend yourself and your job.

It is also very easy for a manager to place you in a position of having to reach impossible goals. In fact, this was a tactic that one bullying boss I knew often employed in order to 'get rid' of employees she did not like. She would 'work them out' of the company by having them fail miserably at whatever task they are set - by assigning them impossible targets. You can't exactly refuse work that you are given, so this tactic works very successfully. Which is why I recommend: get another job as soon as possible.

If ever anything gets really nasty and authorities of any kind are involved (including those of investigative committees and the like) you will need evidence to back up any claims you make about bullying. In the heat of the moment you might feel like you will never forget the circumstances of a situation - but details quickly fade.

'Who' said 'what' becomes blurry and obscure. No-one else remembers and they probably don't want to get involved anyway. And when you try to describe a situation to someone else it often sounds a whole lot less awful than it actually was, because it is difficult to describe snide remarks, innuendo and implied criticism. Also, bullies are often nasty to underlings, but perfectly reasonable with superiors. If you speak to someone higher up, you better have facts to back up your claims or they may not believe you.

Best thing is: while you are still stinging from the injustices, note the date, circumstances, what offensive things were said or done and where. If any emails or correspondence is involved, keep a copy with your records. When you have enough evidence, if you have the stomach for it and you get the sense that the company supports this kind of action, report it to the appropriate person.

That having being said, I once had a contract position where my manager was often rude to her staff. She would occasionally come into work tipsy and offensive. After months of this I spoke to the HR person who turned out to be terrified of my manager. The HR person did not act. Nor did the General Manager. I eventually left, but I hear this bullying boss is still working in the same place, no doubt making life a misery for some other unfortunate people.

I could have saved myself some trouble had I wised up to the clue that no-one had yet fired her for being intoxicated at work. If the company does not support your action you might well land up with a redundancy notice if they prefer the problem to go away. If you are not yet ready to leave (still looking for another job, for example) bide your time until you are ready - but go soon!

If the bullying has sunk as low as personal insults, name-calling, attacks on your personality or physical appearance - its time to stand up for yourself strongly or leave immediately. It is very difficult to recover from continued abuse of this nature and it will take a heavy toll on your self-esteem to allow this to continue happening.

State calmly and purposefully: 'I do not accept these kinds of personal attacks' and leave the situation immediately (even if you have to take shelter in the restroom). Take it up with your managers' superior at the soonest opportunity.

However, if your manager does not have a superior or the bullying does not stop, you have no option but to face the fact that the cost of staying might be higher than the cost of leaving.

Believe in yourself enough to take the step. You CAN find another job. You CAN survive. Allowing your emotional wellbeing to be trampled underfoot is not an option.

Even better: use your intuition and powers of perception when you go to an interview. Watch out for signs that employees are unhappy or that the manager might be 'difficult'.

In my early days I would ignore these warning signals and thats how I ended up with my bullying bosses. Trust your gut feel. If something feels 'wrong', don't take the position, even if it is lucrative. Keep looking until you find a situation that will support you and your success.

Prevention Is Better Than Cure

As you can tell, most of these steps require the ability and courage to assert yourself. That is why assertiveness is a crucial element of self esteem. It both protects and supports self esteem, and shows that self esteem is present. Assertiveness, courage, self awareness and common sense are a winning combination when dealing with a bullying boss!

What to do when the bully is your colleague.