What makes dealing with criticism so hard is that no-one likes to feel judged. It's painful. It makes us unhappy. It makes us feel bad. 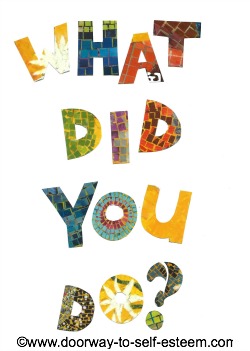 In the world of work especially, people like to talk about 'positive' of 'constructive criticism'.

They say things like, "It's not you I am rejecting, but what you're doing."

Or they say: "You are not the mistakes you make."

This may be true, but as all of us who have made mistakes or upset others know (i.e. everyone on the planet) this doesn't really soften the blow of being criticized.

It might make the critic feel better, but those who are criticized still feel 'wrong'.

Are You Feeding the Negative or the Positive?

By nature, all criticism is focused on something that someone regards as 'unwanted'. There is always a negative judgment involved. It is this negative judgment that holds the 'sting' that the person on the receiving end feels.

No matter how gracefully you deliver criticism, the person being criticized is always going to feel a little 'something negative'.

Criticism might force a person into 'doing things your way', especially if they feel they have something to lose if they don't (e.g. a job, or a relationship). But it won't encourage cooperation from the inside out.

Everything works better when people are motivated by the possibility of success, rather than the fear of failure. When dealing with criticism, the same principle applies.

As a facilitator for a program teaching assertiveness, there was a simple formula we taught for dealing with criticism. It was about less about criticizing what was wrong, and more about giving helpful feedback.

'Helpful feedback' can still be 'criticism', depending on what you focus on (the negative or the positive). But helpful feedback is more effective than general criticism, because it provides specific information about:

Knowing these two things enables you to make decisions about you can do to fix things. This is unlike general criticism, which is usually a vague negative judgement that makes you feel bad without giving you a clear idea of how to change things.

However, if you want to go to the next level (beyond dealing with criticism) - read on past this to the next section.

This formula works very well as a tool to move people away from the personal and destructive way they usually criticize others.

It also makes dealing with criticism easier for the critic, because the person on the receiving may be somewhat less defensive than if you went ahead and laid straight into them about 'everything they do wrong'.

Home Example of Dealing With Criticism:

A wife sees her husband throw his wet towel on the floor for the umpteenth time. Here's how she usually gives criticism:

Wife: "Why do you always throw your wet towels on the floor? What's wrong with you?"

Husband: "Why do you always have to overreact about everything? I don't do it all the time. And anyway you're twice as bad."

Wife: "What do you mean, twice as bad? I never throw my towels on the floor. I'm not an inconsiderate, lazy pig."

Husband: Lazy pig? What about when you …(here comes the argument)

End result: Angry wife, angry husband. Is he going to throw it in the bin next time? If yes, it may be with resentment. If no, it might be out of stubbornness or forgetfulness. None of these feelings and attitudes are helpful to the situation or the relationship.

Wife: "When you throw your wet towels on the floor, I feel irritated and upset, and I'd like you to put your used towels in the laundry basket instead.

Wife: "I know. But could you pick it up and in future could you put it in the bin?"

He might sting a little, he might only pick it up later, but at least he's got the message. Now don't you go and pick it up! (Or you've undermined your own request).

If he continues to throw his towels on the floor after making this reasonable request, that is another story that requires a different response.

Breaking It Down According to the 3-Steps:

Work Example of Dealing With Criticism:

An employee is unhelpful to a customer which causes the loss of that customer and embarrassment for the company. How a manager might usually criticize:

Manager: "You cannot treat a customer that way. You've lost the company money and caused us embarrassment in the press. Your behaviour was unacceptable and you can regard this as your first warning. Don't mess up again."

End result: Fearful and/or resentful employee. Angry employer. Neither of these contribute to a cooperative, happy, or successful work environment.

End result: More investment from the employee, although it may still be fear driven (fear of getting into trouble, fear of losing their job). However, here's one big difference. The employee knows exactly what to do to 'get it right'.

This is a much more helpful and constructive way of dealing with criticism than if the manager simply said: "We should never have put you in sales. You are terrible at it." and left it at that.

Going To The Next Level 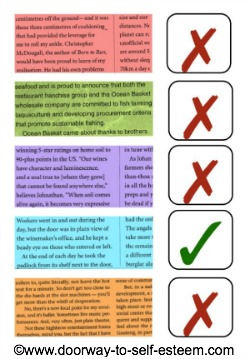 The most powerful and effective step of the 3-step method is the last one.

Describing the behaviour that you do want.

When you give criticism, isn't your intention actually to solve a problem that you've spotted? (towels on the floor, unhappy customer).

Can you solve a problem by focusing on the problem and making the 'culprit' feel bad about their mistakes?

Doesn't this create even more problems? Could you help them identify and implement a solution instead?

People do unhelpful things either because they don't realize the impact it has on others (ignorance), don't care about the impact, or don't know a better method.

They might be stuck in a habit of unhelpful behaviour with no clue how to do it differently.

By skipping steps 1 and 2 and going straight to what you do want, you give the person a clear idea of what would make you happy, what would solve the problem, or how to 'get it right', without actually making the person feel 'wrong'.

After you've made your request step back and give the person a chance to 'do it right'. You'll be surprised at how willing people are to meet the needs of the situation.

Home Example of Dealing With Criticism:

Wife sees husband throwing his wet towel on the floor for the umpteenth time. She says:

"Please will you put your dirty laundry in the bin. Thanks."

Work Example of Dealing With Criticism:

Employer finds out an employee has been unhelpful to a customer causing loss of that customer and embarrassment to the company. He says:

"When a customer comes in with a problem, here are the steps I want you to follow:

a) identify the problem

b) try to solve it

c) If you can't solve it, escalate to your manager

d) follow up to ensure the customer has been satisfied.

If you cannot do that for any reason, contact me. Do not let the customer leave here unhappy."

"Rather than looking for all the things that are wrong with people, remember their good qualities, and when the opportunity arises, praise them." - from Philosophy Works 2, The Source of Happiness

This approach reduces the anxiety that usually arises when you point out someone is 'doing something wrong' and increases your chances of getting cooperation.

It appeals to the inner motivation of the person to get along, rather than trying to force them into a behaviour through intimidation, blame, guilt or shame.

This automatically elevates the situation to a higher level.

People like receiving praise. When you use this approach, you reinforce the behaviour you do want, by increasing the good feelings of all concerned.

Dealing With Criticism When You Are Being Criticized

You can use the same 3-step method when you are criticized poorly, to get the information you need to solve the problem. Only, you will be asking specific questions in order to get your critic to provide the information covered by the 3-Steps.

Read more about dealing with criticism when you are being criticized here.

"Start by giving up criticism. Be supportive instead." - from Philosophy Works 2, The Source of Happiness

Return from Dealing With Criticism: When You Are the Critic to Emotional IQ

Return from Dealing with Criticism: When You Are the Critic to Bullying At Work

You Are Your Own Billboard

Extra Tips for Building Self Esteem

Gratitude is Good For You

Understanding Emotions Through the Five Senses