When it comes to assertiveness, interactions between people can be seen in terms of two factors:

A strong and healthy concern for yourself and your goals.

A strong and healthy concern for other people.

With high self esteem and assertiveness, you tend to balance these two aspects quite effectively. Both are seen as necessary and important.

Things go wrong when you have:

A Lot of Tiger and Too Little Teddybear:
AGGRESSIVE BEHAVIOUR 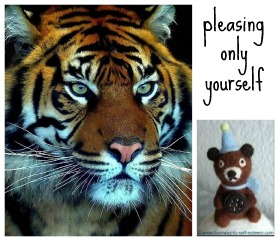 A strong concern for yourself and your goals combined with a low concern for others results in aggressive behaviour.

There is nothing wrong with looking after your own interests, provided you don't exclude the interests of others in the process.

As soon as you narrow your interests down to your own individual self and nothing else, you are adopting a very limited world view. It may appear to work for you in the short term, but in reality, this is how hurtful and destructive events in the world begin.

A Lot of Teddybear and Too Little Tiger:
SUBMISSIVE BEHAVIOUR 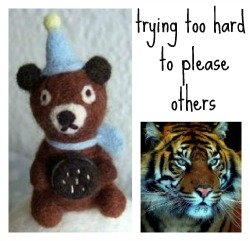 A strong concern for other people combined with a low concern for yourself and your own goals results in over-compliant or passive behaviour - or lack of assertiveness.

This is seen when someone continually gives up what they want in order to please others, to keep the peace, or because of fear of what might happen if they don't. It shows low concern for self and is submissive.

While this style may allow someone to avoid conflict in the short term, in the long term personal frustrations and resentments build up that eventually lead to discontent and strife.

Bottling up fear, resentment, anger, disappointment and other negative emotions affects your physical health and in the long term can result in problems with your digestion, blood pressure or heart.

The problem with passive behaviour is that you begin to believe you are helpless, and you behave in a helpless fashion, when you really have the power to act differently. It is a mind-trap.

Being passive appears to allow you to keep your fears to a minimum, and allows you to 'dodge' conflict. But it also results in you giving up your personal power, happiness and ability to influence a situation.

There is a tendency to blame the situation, other people, or even yourself, for how things turn out - rather than trying to change things.

People who choose to act in a passive way might have an external locus of control. They may feel 'trapped' by circumstances or certain choices. Rather than feeling like active agents in their own lives, they may feel that things 'happen to them and they cannot do anything about it'.

When you feel others have taken advantage of you - it can be very empowering to really look closely at how you might have helped create the opportunity that allowed them to do so.

When you are a free man (or woman), what you do is up to you, no matter who is doing the asking. If you don't know how to deal with a situation, it is up to you to learn what you need to know. 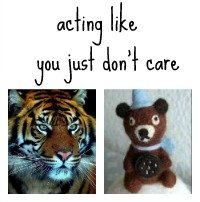 When you combine a low inclination to honour your own needs (passivity), with a low concern for others (aggression), you get passive-aggression.

This is a complex behaviour style because there are a several factors that influence it.

On the one hand passive-aggressive responses come about when you feel negative emotions, but are uncomfortable expressing them directly. Anger, resentment or other negative emotions are then expressed indirectly, or in ways that attempt to hide how you truly feel.

But the reasons for feeling this discomfort can be complicated. For some, it has to do with not having the skill to communicate openly, or not feeling personally comfortable with that level of honesty, perhaps because of past experiences. For others, the context can play a big role.

As humans, we don't live in a vacuum. The environment and conditions we live and work in, influence our behaviour. In some situations speaking openly and honestly about your true feelings can have real, negative consequences. As a result, we try to hide feelings that we think could be controversial.

But emotions can be like water flowing from high to low ground. They trickle through crevices and hidden pathways until they find their way out. Attempts to hide emotions have varying degrees of success.

But it is important to consider that when the context doesn't support open communication and dialogue, passive-aggression can result. This is why it is so important for parents, managers, and people in general, to create an environment that encourages open communication.

Even when the environment does encourage open communication, for some people who have had negative experiences, just the fear of possible negative outcomes (whether these are legitimate or not), can cause them to self-censor.

This may lead them to go along with situations that make them unhappy, without actively communicating or trying to negotiate a different path. Ultimately though, that unhappiness or hostility gets expressed in passive, indirect ways. Perhaps outside of direct view, behind-the-scenes, or through undermining behaviours.

Not answering a call from someone when you're angry with them, or pretending you can't hear them when they speak to you.

Giving someone the 'cold shoulder', rather then telling them you are upset about something.

'Accidentally' forgetting to give your boss an important message so that he or she ends up looking stupid - in retaliation for something.

Saying you'll do something when you have no intention of doing it.

Blaming yourself, or other people, for things you feel are 'wrong', without ever trying to fix anything yourself.

Undermining someone who upset you, behind their back.

The problem with these behaviours:

If you take a close look at these responses you will see that they hold no benefit in the long run for either party. Ultimately they harm both the relationship (not enough Teddybear), and also the self (not enough Tiger).

Everyone loses with passive-aggression as it closes the door to finding a solution together.

Not answering calls or pretending not to hear someone cuts off communication and harms the relationship by making problem-solving impossible. Doing enough of this will lose you the relationship.

Not giving someone the information they need (setting them up to fail), harms the relationship by breaking trust and deliberately causing hurt. This can quickly lose you your job or a friendship.

Saying you'll do something and not doing it breaks the trust others may have in you and destroys your own reputation.

Blaming others for situations you are unhappy with, allows you to displace responsibility onto them for everything that you see as 'wrong', instead of looking for ways you might be able to change things for the better. This simultaneously disempowers you and causes those who are 'blamed' to resent you - a destructive combination. It keeps everyone stuck in a bad situation and creates new aggravations.

Undermining someone behind their back, may relieve your emotions temporarily, but the listener comes to know you as the kind of person who 'talks behind people's back'. They will learn not trust you.

Passive-aggression harms the other person, but it is a double-edged sword that cuts you at the same time.

Assertiveness is key to maintaining self esteem

Without sufficient assertiveness you cannot look after your own interests or your relationships properly. As a result, your self esteem suffers.

When you act with assertiveness you support yourself as well as your relationships. Being able to look after yourself well gives you a good foundation from which to operate in the world and contributes to a strong sense of self worth.

When you strengthen you ability to honour your own needs and wishes as well as honouring the needs and requirements of others you become someone you can rely on, as well as someone other's can rely on. You become trust-worthy.

Your body language is an important part of how you assert yourself. Like a billboard, it 'advertises' what you think and feel about yourself. Check out Assertiveness Without a Word for more on non-verbal assertiveness.

In theory, there is no difference between theory and practice. But, in practice, there is. - Jan L.A. Van Der Snepscheut
(from The QI Book of Quotations Advanced Banter by J Lloyd & J Mitchinson)

You Are Your Own Billboard

Dealing With Criticism: For the Critic